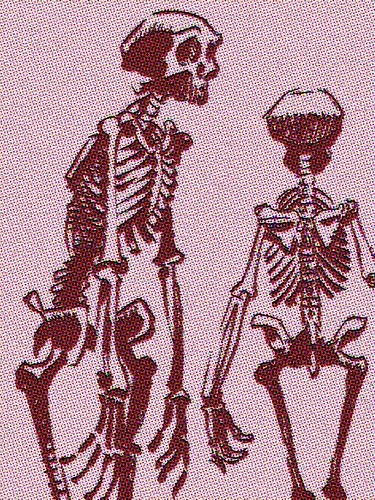 Oops. I just found out that a prose piece I submitted was published in the September 2008 issue of the journal Impetus! It is reprinted here with my own permission.

They sat on the porch as the gloaming grew with the soft chirruzz of the bug-breeze. An ice cube wheezed and gave up in a glass.

“That was just fine,” said Coccyx, chrome wheels of his new chair glinting as he pushed forward, then back, gently rocking.

“Not bad at all,” agreed Sternum as she shifted on the swing. The rusted chains moaned in response.

“Although I could have done with a bit more of a view,” said Coccyx.  “All that action and I couldn’t rightly see none of it.”

“It’s your own damned fault,” huffed Sternum. “You can’t see if you don’t look. Always hiding, lurking behind things. Stand up for yourself, for once!”

The porch was quiet for a while.  Sky interrupted itself mid-orange to stumble into dark blue.  There was no more ice to melt, and the bugs were at intermission.

Sulkily, Coccyx spoke.  “Wish you didn’t always have to toss that at me.” Without realizing it, he started to wheel himself to and fro again.

“You know,” said Sternum, “you’re right.”  That was all she was willing to give, but it was enough to embolden Coccyx.

Sternum pushed herself on the swing, toes light on the worn floorboards.  Her smile was smug, but she draped a doily of charity over it.

“Circumstance, that’s all,” she smiled.  “That’s how life is. How it works out. Circumstance.”

Coccyx didn’t miss the pity in her tone, although he tried. He knew it wasn’t easy for her, either, to be right next to all that responsibility. They sat on the porch and rocked like breathing into the night.